Environmental racism is the disproportionate location of toxic facilities and other environmental hazards near to communities of colour and the working poor. Using interviews with community members and footage from a series of workshops the ENRICH Project held in 2013 and 2014 for residents in Lincolnville and Upper Big Tracadie (September 28, 2013), North Preston and East Preston (October 5, 2013), Yarmouth Acadia First Nation (October 19, 2013), Membertou (November 23, 2013) and Halifax Regional Municipality and surrounding areas (January 11, 2014), the film sheds light on the concerns that community members have long had about the links between water, air and soil contaminants and pollutants and chronic diseases, such as cancer and respiratory illness.

A call for justice echoes throughout the film as community members demand more inclusive and equitable government policies and best practice guidelines for community consultations and decision-making processes related to the location of toxic facilities and other environmental hazards.

Since In Whose Backyard? was released in March 2014, it has been screened at the Emerging Lens Film Festival in Halifax, the Tatamagouche Summer Free School and various community events organized by the ENRICH Project.

The film serves as a unique curriculum resource for universities, colleges and high schools because it is one of few films that focus on experiences of environmental racism in both Indigenous and African Canadian communities in Nova Scotia. It has been used as a curriculum resource in the School of Nursing at Dalhousie University, the School of Nursing at St. Francis Xavier University in Antigonish, Nova Scotia and by various instructors at Dawson College in Montréal.

Environmental Justice is the fair treatment and meaningful involvement of all people regardless of race, colour, national origin, or income with respect to the development and implementation of environmental regulations or policies. The environmental justice movement emerged to challenge the unfair distribution of toxic and dangerous waste facilities, disproportionately located in low-income communities of colour.

Environmental Health Inequities focus on the disproportionate health impacts associated with living or working in proximity to these industries.

Epidemiology is the study and branch of science concerned with the patterns, causes, and effects of health and disease conditions in defined populations.

Toxic Waste refers to hazardous material rejected into the environment, often in chemical form, that can cause death or injury to living creatures. It usually is the product of industry or commerce, released into air, water, or land, and can pose a long-term risk to health or environment. 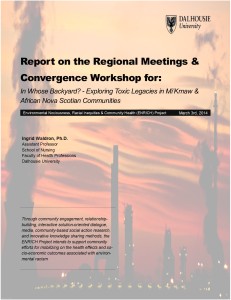 ARE YOU concerned about how nearby toxic industries, producing waste and pollution, impact your community’s and health and well-being? HAVE YOU been left out of decisions on where these toxic industries are placed? DO YOU want to come together as a community to define possible solutions?

In Whose Backyard? is the name for a series of workshops that brought together members of Mi’kmaq and African Nova Scotian communities to discuss how they have been and are currently being affected by nearby toxic industries—such as landfills, incinerators, sewage treatment plants, refineries, pulp and paper mills, oil and gas extraction, and hazardous waste storage. Participants shared their concerns about the health, economic, social, spiritual and environmental effects of such facilities.

An initial set of regional meetings and workshops, undertaken in the fall of 2013, established forums for community members to openly discuss their concerns and experiences relating to these toxic industries in their area and define priorities for future research and advocacy efforts in response. Regional meetings were held in Acadia First Nation, Sunnyville, Membertou First Nation, North Preston and Halifax.

A final convergence workshop, details here, was held in January 2014 and explored commonalities while building solidarity among communities. It also reported on the findings from the regional workshops and identified issues around community ownership and leadership for resources created and research studies pursued.

A summary of findings from this series of workshops was also published in the journal Environmental Justice. Click here to view or download the file.

A report was released in November 2014 on consultations held between ENRICH Project researchers and government officials, including Nova Scotia Environment. Click here to view or download the file.